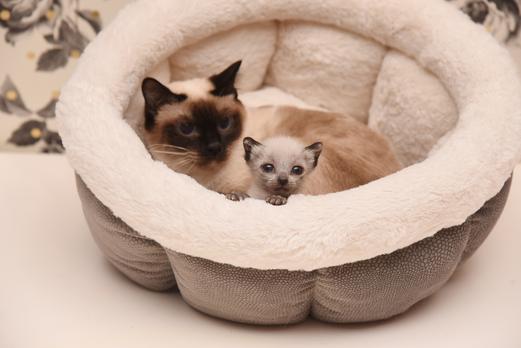 intelligent, good-natured, affectionate and social; making it easily get along with other friendly animals. They will be content to quietly follow you around and then sit in your lap for petting whenever you give it a chance. In general, the Toybob is a happy cat who gets along with everyone and is a playful, cuddly companion. This gentle yet happy breed enjoys attention and interaction, making it a terrific pet for senior citizens and children.

CARE:
Caring for a Toybob cat or kitten is easy. The Toybob does not require any special diet, as with any other domestic cat breed, a high-quality cat food keeps it happy and healthy. The short coat of the Toybob Shorthair is plush but simple to care for, brush it once or twice a week to maintain its coat beautiful. Toybob Longhair has a semi-long coat and does not mat or tangle and is easy to groom. As with the Shorthair, comb its coat once or twice a week to keep it in optimal condition. Both varieties are low shed, but the coat does change seasonally.

The Toybob cat is a naturally small bobbed tailed cat having originated in Russia. It is considered to be one of the smallest of all cat breeds that can’t grow any larger than the size of a 6-month-old kitten of a well-developed domestic cat. They have a compact body, well-developed musculature, and a short tail that consists of several distorted vertebrae (visible length of 3-7 cm). Because its head and legs are in proportion to the body, it is considered a miniature and does not have the same dwarfism as the Munchkin cat. Regardless of their size, they are healthy. The breed is also known for its large eyes, and the big-eyed expression is what gives the Toybob its sweet-faced look. There is both a shorthair and longhair variety and come in all colors and patterns.

The Toybob has all of the qualities one looks for in a companion cat! Toybobs thrive when they are with their people. The Toybob is best described as “The Small Cats With Big Loving Hearts." The Toybob is